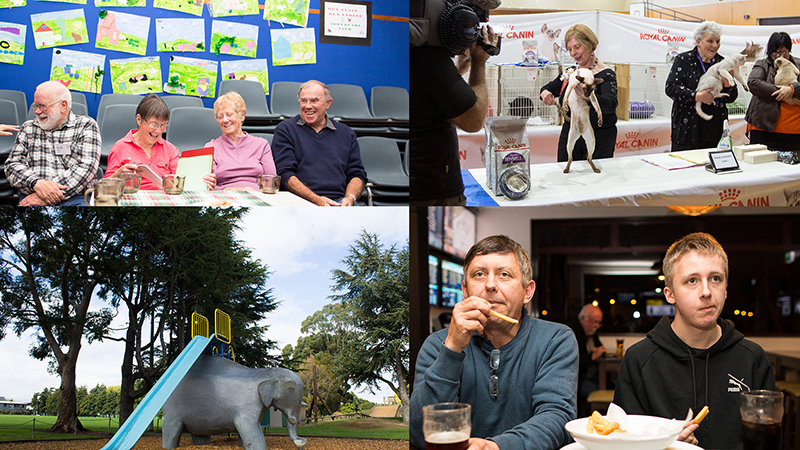 In 2017 Thomas Herman from the School of Fine Arts created a record of the Bishopdale area.

The Bishopdale 2017 project was a collaboration between Christchurch City Libraries and the University of Canterbury, School of Fine Arts to create a documentary photographic record of Bishopdale of people and the physical and social environment, that reflects the diversity of the Bishopdale area in 2017.
79
Share by Facebook Share by Twitter Share by Pinterest Share by Email
Thomas Herman : Bishopdale, 2017
Member of
Bishopdale, 2017
CCL:Format
Collection
Extent
1 item
Resource Type
Collection 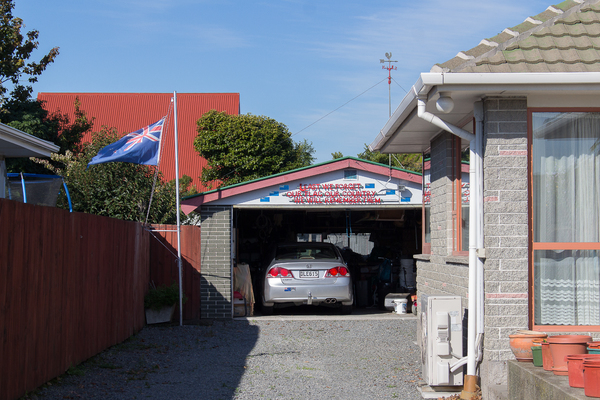 "View of a flag and sign at 2 Cotswold Avenue, Bishopdale on Anzac day. "I was lucky enough to come across this house; the sign on the garage says "Lest we forget, our flag our country, we will...
Image 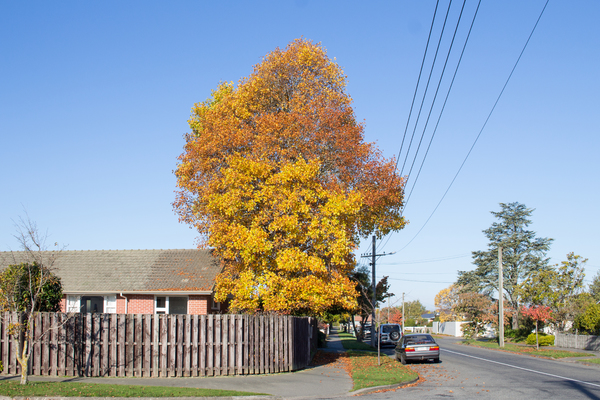 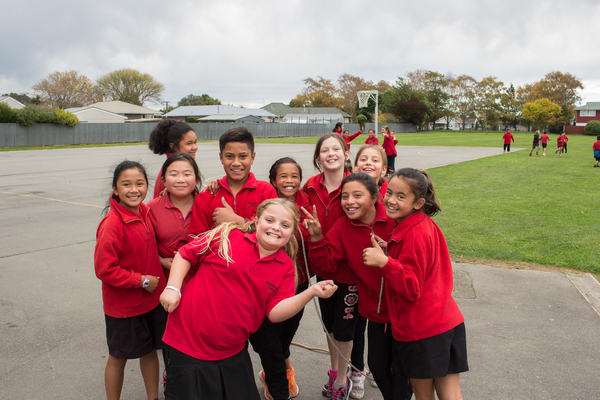 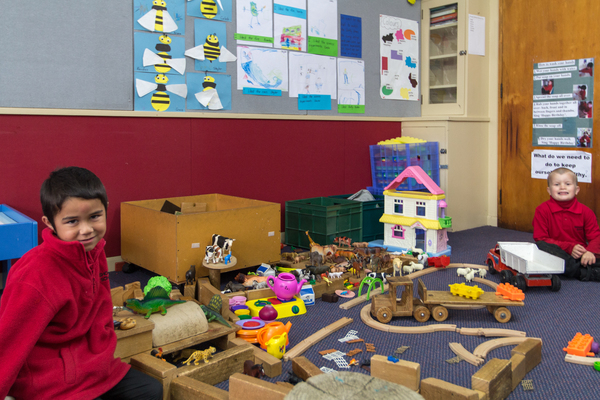 Two children from Bishopdale Primary School show off their farm toys, train set, dinosaurs and trucks in their classroom.
Image 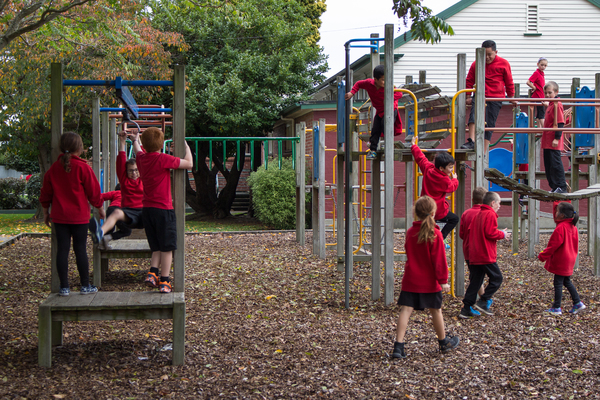 The children of Bishopdale Primary enjoying their lunch hour and playing on the school playground at 467 Greers Road, Bishopdale.
Image 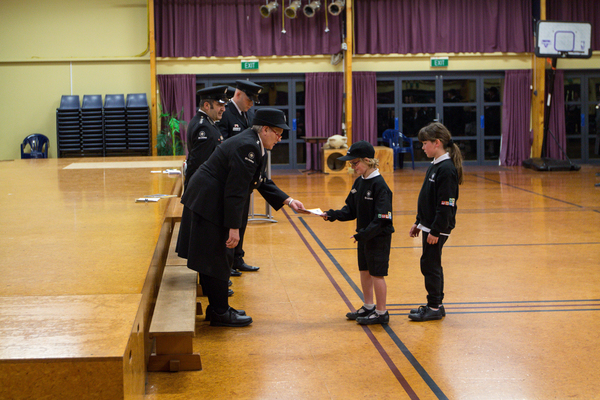 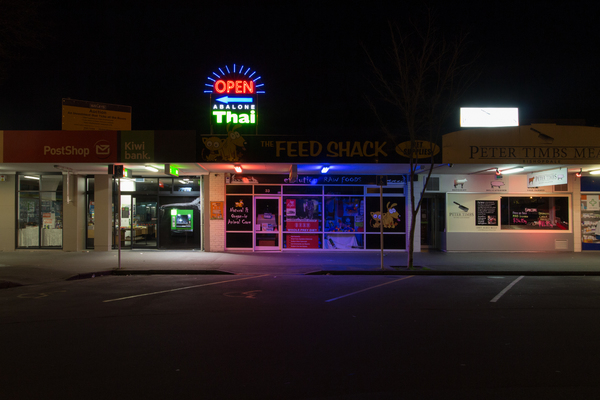 View across Bishopdale Village Mall at night with a sign for Abalone Thai restaurant lit up above the shop fronts. NZ Post office, The Feed Shack and Peter Timbs Meats shop fronts are also visible.
Image 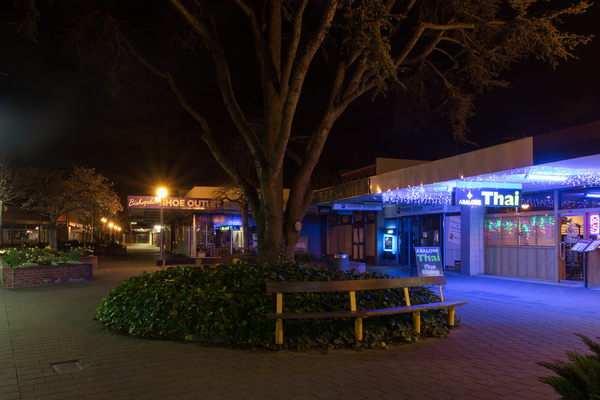 View across Bishopdale Village Mall at night with Abalone Thai restaurant lit up to the left.
Image 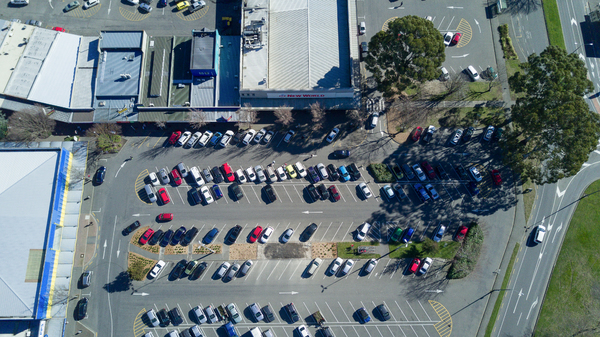 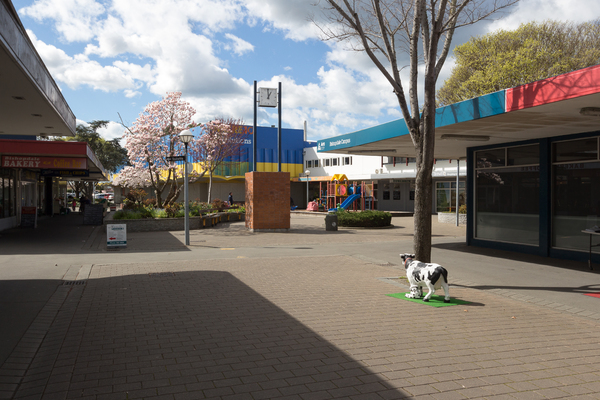 View within Bishopdale Village Mall on a sunny day looking towards the cow mascot for a shoe shop, ARA, the clock tower, playground and Mitre 10 building.
Image 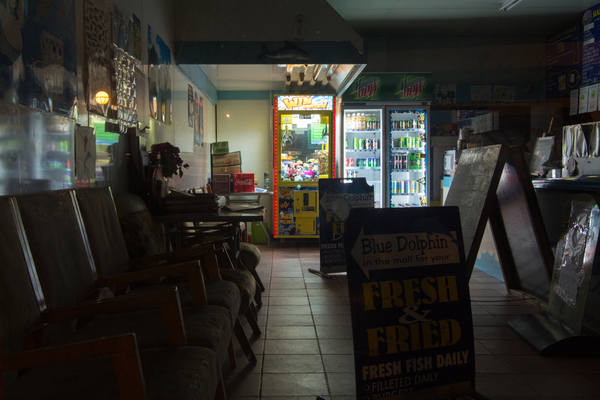 Interior of the Blue Dolphin Fish and Chip shop at Bishopdale Village Mall, packed down at night. In the centre are three a-frame signs which have been brought in from outside.
Image 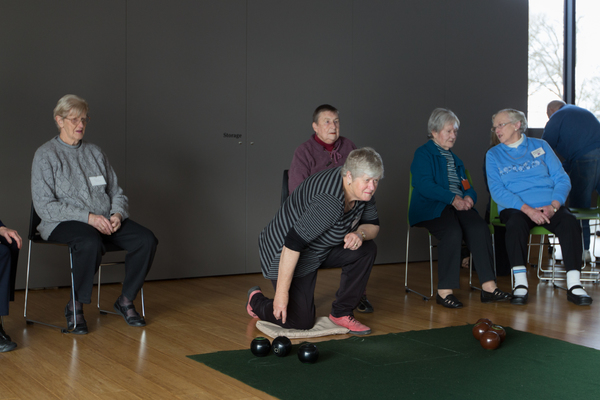 A group of people from the Bishopdale Bowls club participating in a bowls game in the hall at the new Bishopdale Library.
Image 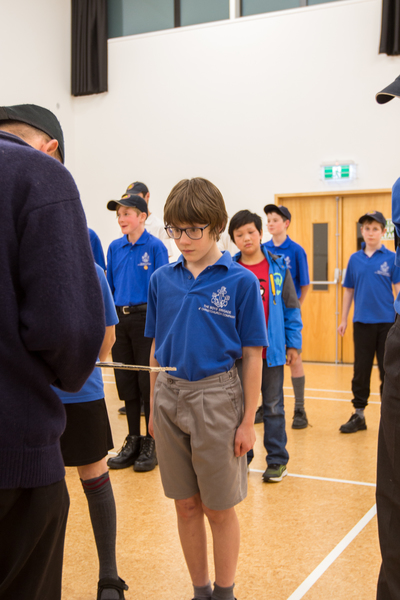 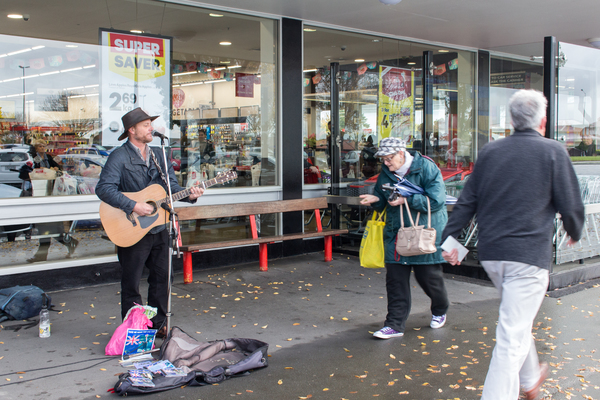 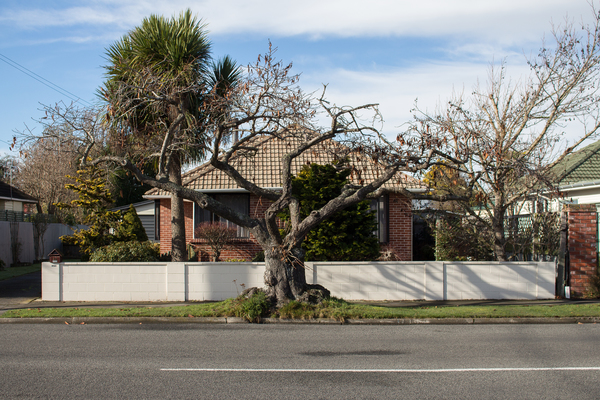 Cherry tree outside a house in Bishopdale

View of a Cherry tree outside a house at 42 Breens Road, Bishopdale.
Image 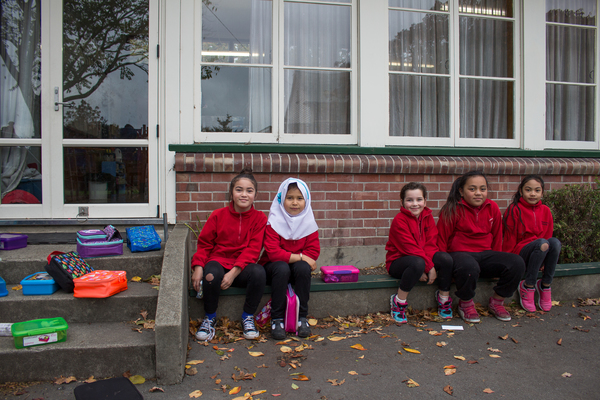 A group of five children sat outside a classroom at Bishopdale Primary School at 468 Greers Road, Bishopdale.
Image 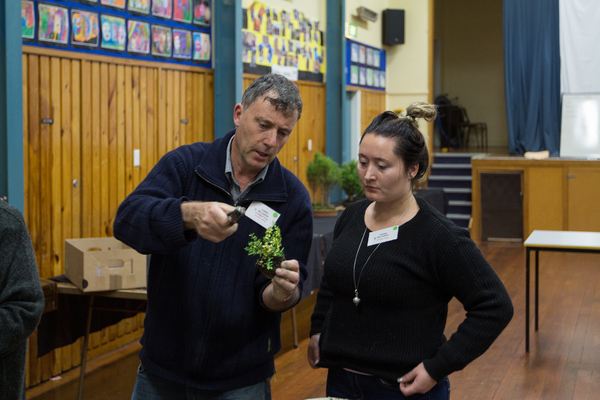 Chris showing daughter Kerri how to cut a bonsai 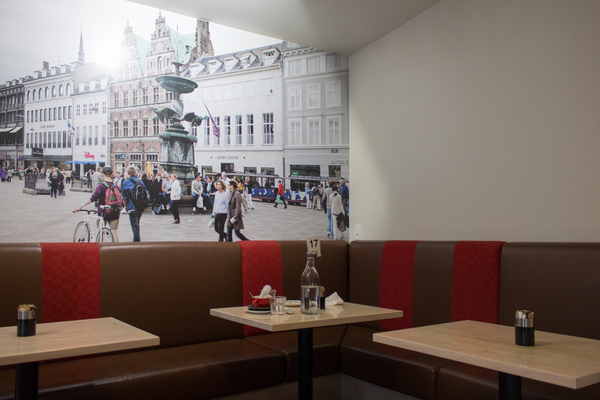 View of interior decoration at the Copenhagen Bakery at 409 Harewood Road, Bishopdale. The bakery was formerly a petrol station and is one of Christchurch's most well known bakeries.
Image 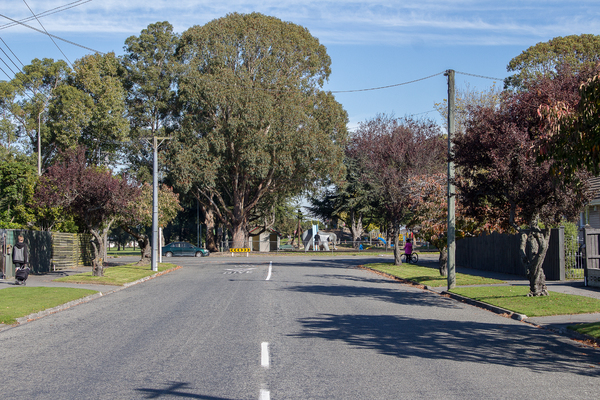 View down Cotswold Avenue in Bishopdale with a child on the left doing a paper run and a girl on a bicycle on the right waiting for a friend. In the background is the elephant slide in Bishopdale Park...
Image 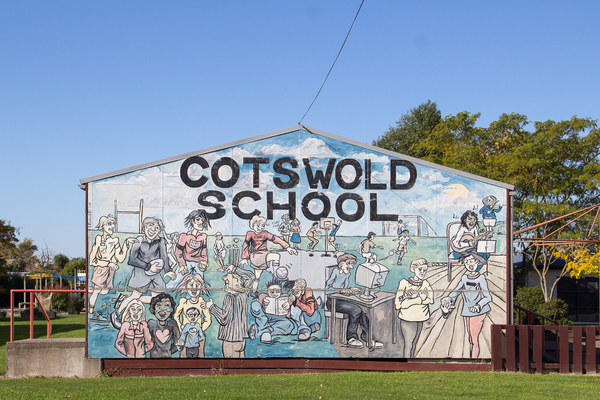 Mural on the side of a classroom outside Cotswold School, Bishopdale.
Image 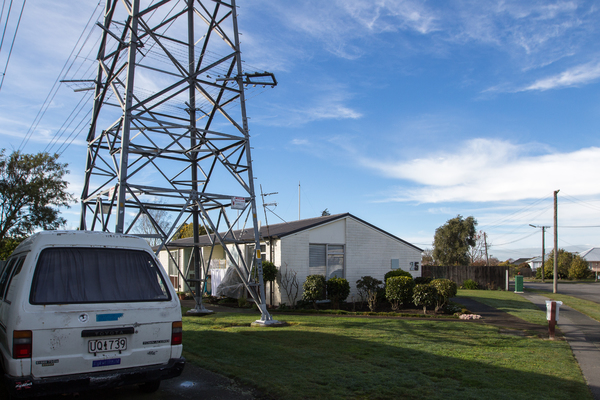 Exterior view of Council flats next to an electricity pylon at 25 Mooray Avenue, Bishopdale.
Image 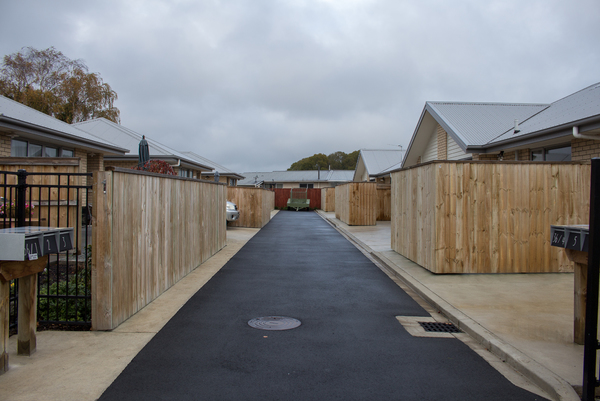 Driveway for house in Bishopdale

Wet driveway of the houses on the corner of Eastling Street and Stackhouse Avenue, Bishopdale.
Image 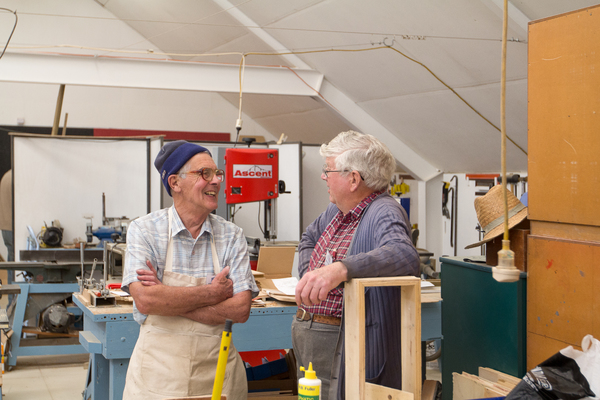 Ernest and Alan take a break at the MeNZ Shed

Making a corner box for the Christchurch Women's Refuge, one of the many community based projects that the MeNZ Shed performs for free at 55 Kendal Avenue, Bishopdale.
Showing 1 - 24 of 79 items